Brothers Robert and Walter G. Pattison started out as dairy farmers, working for their fathers company in Edinburgh. During the 1880s, they realised they could make more profit with whisky than milk. The brothers partnered with Alexander Elder and founded Pattison, Elder & Co. The newly formed company focused on blending Scotch whisky, shipping brands like Morning Dew and Royal Gordon. Two years later, the company went public on the stock market, netting the brothers a whopping GBP 100,000. Around this time, production of Cognac in France stagnated due to a phylloxera epidemic, which devastated many of the vineyards, and caused a worldwide shortage of Brandy. As a result, whisky production went through the roof. An add for Pattisons whisky

With these parameters in place, the whisky industry boomed. New distilleries were formed, while existing ones were expanded or modernised. For quite some time, the sky appeared to be the limit. Banks were all too happy lending money to whisky-entrepreneurs, and for the Pattison brothers cash was easily obtained. Having achieved great success in the blending business, the brothers decided to move to distillation, and founded Pattisons Ltd in 1896.

The new venture saw great success, and the brothers quickly expanded their hold on the industry. They secured half the shares in the Glenfarclas distillery, as well as acquired stocks in the Oban, Aultmore-Glenlivet, and Ardgowan grain distilleries. They also decided to hedge their risk by diversifying into other industries, by purchasing Duddingston Brewery in Edinburgh.

While whisky was one aspect of their business, perhaps the brothers achieved most fame with advertising. Pattinson Ltd spent astonish amounts on marketing and sales. In 1897 they reportedly spent GBP 20,000 on marketing. In those days, that would have allowed them to buy or build a distillery. The year afterthey even spent as much as GBP 60,000. Perhaps their most famous heist was when they purchased 500 African Grey parrots from a captain whose ship had picked them up in Africa. The brothers insisted that the parrots be taught to say “Buy Pattisons whisky”, and subsequently gave them out to vendors selling their whisky.

All the riches lead to the brothers leading exorbitant and flamboyant lifestyles. They bought mansions and spent money on all kinds of luxuries. A favourite tactic of theirs was deliberately missing trains and instead booking a private, expensive train to get them to their meetings. They would call in advance, to ensuire the press would be present to witness these kind of events.

Unfortunately, much of the success of the brothers was based on borrowed credit, and creative bookkeeping. The company had inflated its profits, committed fraud by blending its produce with cheaper spirits and selling it as “Fine old GlenLivit” premium whisky, and over-valued its properties. It had also defaulted on a number of loans, leading to its stock to crash on December 5, 1898. The brothers ended up dragged through court, charged for 4 counts of fraud and embezzlement in 1901. Within an hour and a half, the court found the brothers guilty; Roberts was sentenced to 18 months in prison, while his brother Walter was let off easy with 9 months of jail-time. 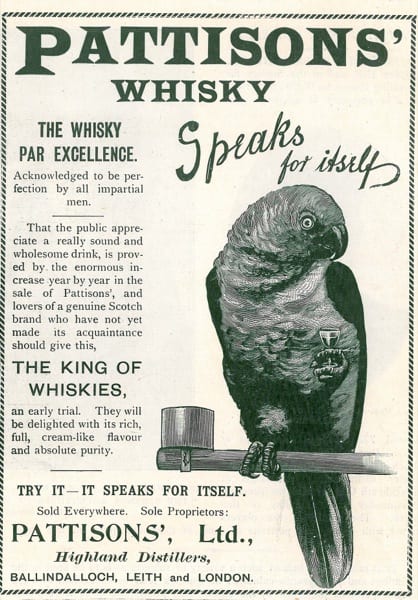 The crash of Pattison Ltd caused a domino effect in the whisky industry, which had been under strain as it was. Production rose from 2-billion gallons a year to 13 million gallons in a very short period. The crash dragged 10 companies (all business partners of the Pattisons), as well as a number of smaller suppliers down. The Glen Elgin distillery, established just a year before in 1900, was forced to close. At the same time, it caused whisky prices to drop sharply. Apart from the short-term effects, the crash had a number of long-term effects. The main one being that no new distilleries would be built for nearly half a century. The first new distillery would be Tullibardine in 1949.