All Single Malt whisky starts as barley. This type of grain is used due to its high level of starch in the grain. The starch will be converted into sugars during the mashing phase of the distilling.

In order to release the starch from the core of the barley, malting recognizes three distinct phases. The first phase, steeping, involves soaking the barley grains with water in large vessels (steeps). Oxygen is pumped through in order to accelerate the absorption of water into the Barley. Steeping usually lasts between 24-36 hours. Steeping ensures the barley will enter the second phase of germination, where inside the barley grain enzymes will start breaking down the cell walls and convert starch into sugars. Barley grains start developing roots and shoots during this phase. Germination generally is done on so-called malting floors. The barley is spread out, and turned regularly. This is in order to control the heat generated by the process, and to prevent the grains from sticking together. Germination takes between five to nine days.

After the cell walls of the grains have been broken down, but before the starch is being consumed, germination will be stopped by heating the grain. This is the third phase of the malting process, and is known as kilning. The grain will be dried by hot air or smoke rising from a kiln through a perforated floor on which the barley (now called green malt) has been spread. Peat can be added to the fire during part of the drying process in order to give the barley a bit of a smoky flavor. The distinctive pagoda roofs one can see on the various distillery buildings are useful for maximizing airflow during this part of the malting process.

The majority of the distillers in Scotland, with the exception of just a handful (Highland Park, Laphroaig, Bowmore, Balvenie, Springbank, BenRiach, Glen Ord and Tamdhu), get their malted barley from industrial maltsters, rather than malting themselves.

The next stage in the process of making whisky is where the malted barley will be crushed by means of a grist mill. This is done so the sugar contained in the grains can be extracted more easily. The crushed grain is known as grist, and will be mixed with hot water in a large round vessel known as a mash tun, typically made of copper or stainless steel. Inside the mash tun, the water and grist will be mixed by means of rotating rakes. This ensures the enzymes contained in the grain will convert the remainder of starch into sugar. The sugar which ends up in the water (wort), which is drained from the mash tun, and collected in the worts receiver. 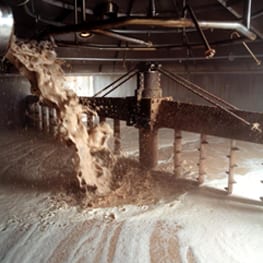 Generally, three to four washings are performed, where the temperature of the water increases with each washing in order to extract the maximum amount of sugar residue. Whatever is left of the grains after the mashing will be sold off as cattle feed.

After all washings are done, the water in the worts receiver will be cooled down and transferred to the washbacks for fermentation.

Fermentation is the process of converting sugars into alcohol by means of yeast. The washbacks where this takes place traditionally are made from wood, and the fermenting process for Scottish whisky will be roughly 50 hours.

After the fermentation finishes, the fermented wort will be heated up. Because alcohol evaporates at a lower temperature than water (78.4 degrees Celsius, or 173.2 degrees Fahrenheit), it is thus possible to separate the two.

Distillation takes place in huge copper vessels, called pot stills. Copper is used because it is easy to shape and it conducts heat very well. As an added bonus, it chemically reacts with the spirit which helps clear out some of the impurities (sulfur and methanol for instance) in it.

Traditionally, a fire was lit under the still. Nowadays it is much more common to see heating coils through which steam runs at the bottom of the still. Yet another way is using heating pots, hollow circular metal pots, which ensures the heat covers more of the wort. The pot stills at The Macallan

As the alcohol evaporates, it travels upwards in the pot still, which gets more and more narrow along the neck, thus ensuring only the most volatile vapors reach the top. The top of the still has a swan-neck leading into a lyne pipe that cools the vapor and allows it to trickle down. The size of the stills and the shape of the neck greatly influences the flavor and quality of the end product.

The condensed vapor leaving the wash still is known as the “low wines”, The product of the spirit still is a combination of so-called foreshots, which are the very first vapors to reach the lyne pipe, and high in toxic alcohol methanol. It further produces the actual spirits as well as feints (impure spirits). The foreshots and feints usually are saved, and distilled again in the next run. The spirits are what the distiller is really after (the “middle cut”), and which will be put to rest in the casks later on.

To cool the vapors down and convert them back to liquid, many distilleries use condensers, through which cold water runs. Others use so-called worm tubs. These are usually located outside in the open air, and a copper pipe (the worm) carries the vapors. Some Scottish (typically Lowland) and most of the Irish distilleries will proceed with a third distillation.

During all stages of the distillation, the distilled spirits flow through a locked device called a “Spirit Safe”. It is locked, by customs, but it’s the tool used by the stillman to determine when the bad part of the distillation passed, and when to start saving the good parts. To do this, he has a number of instruments at his disposal. One way of telling the middle cut is running through is by keeping an eye on the alcohol volume (using a hydrometer) which will be around 75%. When it drops to between 70% and 60% (And depending on the desired end product), the flow will be stopped again, and the remainder will be redistilled. with the next batch.

At this stage, the whisky is ready for maturation. It will be transferred into wooden barrels, and laid to rest for at least three years, though usually this will be much longer. The wood the barrels are made from has a great influence on the final product. Traditionally, Scottish distillers would purchase Spanish oak casks that were previously used for storing Sherry. Spanish or European oak in general gives the whisky a taste that hints of apples or apricot, cinnamon or a hint of nuts.

More recently, a lot of the casks used for maturing Scottish whisky are made from American oak, which tends to give the final product hints of cream,  citrus, vanilla or coconut. Where sherry was usually laid to rest in the Spanish oak casks, their American counterparts usually contained Bourbon. Bourbon barrels commonly are charred before the spirit is poured into them, to ensure better chemical interactions between the Bourbon and the wood.

After the spirit made its way into the cask, it will be laid to rest in a warehouse. Some distillers use relatively small stone or brick buildings called dunnage warehouses that typically contain no more than 3 layers of barrels. This ensures a temperature that will be relatively constant throughout the building, thereby ensuring the casks mature evenly.

Others use more industrialized warehouses of many stories. Here, there will be a great difference between a cask laid to rest near the floor of the warehouse and one that spent its time more near the ceiling. As temperatures are higher at the higher levels, more water than alcohol will evaporate from these casks. At the bottom, the spirit will lose a bit more of its strength.

The exact opposite applies to humidity. The more humid the climate the casks are maturing in, the more alcohol will evaporate. Less humidity means more water than alcohol evaporates 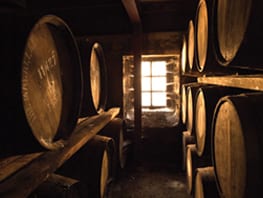 The part of the alcohol that evaporates in this way (which in Scottish warehouses is around 2 per cent per year) is lovingly called “The Angel’s Share”.

The surroundings of the warehouses also have an influence on the whisky resting in their bellies. As an example, consider a warehouse that is built on one the Island of Islay, and therefore constantly bombarded by the ocean odors that are so typical for that island. The whisky will pick up the saltiness from the air through the cask.

When the spirit has matured enough, the whisky is ready to be bottled. Unless the whisky will be bottled as cask strength, It will be watered down or diluted (the spirit at this time contains about 55-60% alcohol, while bottled whisky generally contains around 40-43%), and then mixed with other barrels from the same batch (in the case of a single malt), bottled from an individual cask (single cask) or combined with various other whiskies (in a blend).

Sometimes the distillery will put the spirit in other casks to enrichen the flavor. Casks previously used for Port, or Madeira, for example, lend additional flavors to the whisky, giving it yet another dimension. Another reason to re-cask the whisky is to allow the mix from different casks to come to rest (the so-called marrying of the spirit).

Finally, tiny amounts of spirit caramel might be added at this stage, in order to give the whisky a bit more color, but this should be little enough to not affect the taste.